According to the U.S. Bureau of Labor Statistics, the unemployment rate for individuals with disabilities is 10.4 percent compared to the non-disabled unemployment rate of 4.7 percent. Fortunately, former Occupational Development Center (ODC) client, Mary Kembitskey is no longer a part of this statistic.

After her janitorial enclave was laid off, AmericInn manager, Darrin Smedsmo offered 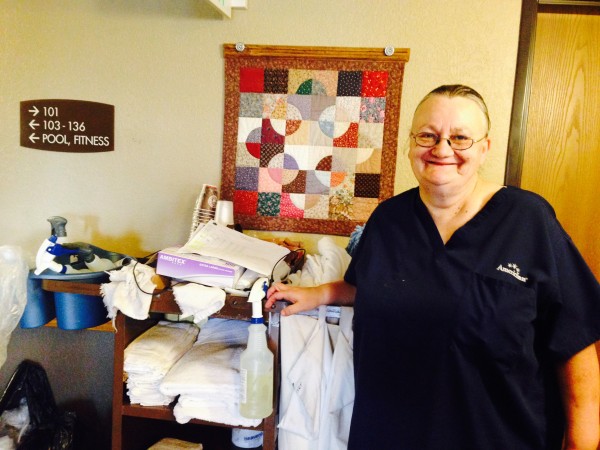 Mary pauses for a quick photo before completing her shift at the AmericInn in Roseau, Minn.

Mary Kembitsky pauses for a photo before completing her shift at the Roseau AmericInn.

Kembitskey an opportunity many individuals with disabilities unfortunately only dream of – full-time employment.

“I was so excited,” 57-year-old Kembitskey stated proudly. “It took a little while to sink in that someone had hired me.”

Kembitskey, who had worked for the ODC in Roseau for five and a half years began working for the AmericInn in March 2015 as part of their housekeeping staff.

“I was happy to take Mary on as a consumer, ” said Smedsmo. ” She proved herself. I was even happier to hire her away from ODC.”

ODC is a nonprofit of northern Minnesota that specializes in providing individuals with disabilities the opportunity for suitable, sustainable employment in their communities.

“We are very happy for Mary’s success,” said Roseau Employment Specialist, Nicole Eback. “Successes, like Mary’s, is all we want for our clients.”

Kimbitskey is proud of her employment, as is her manager.

“I like everything about my job,” Mary said enthusiastically. “I like cleaning and I get along with all the staff.”

“Of all the employees I have ever had, I don’t know many who more willingly work so hard, don’t complain, or have a better attitude than Mary,” Smedsmo stated.

Smedsmo believes Mary has enriched the atmosphere and spirit of AmericInn saying, “I personally think I am a better person, not because I have hired someone with a disability, but because every consumer who has worked here has taught me something, something I would never have learned had I not taken the opportunity. I believe my staff would concur that the consumers we have had have enriched out lives, I know they have mine.”

The ODC is thankful for businesses, like AmericInn, who have and continue to offer a variety of employment opportunities for individuals with disabilities.

Let us know how we can help